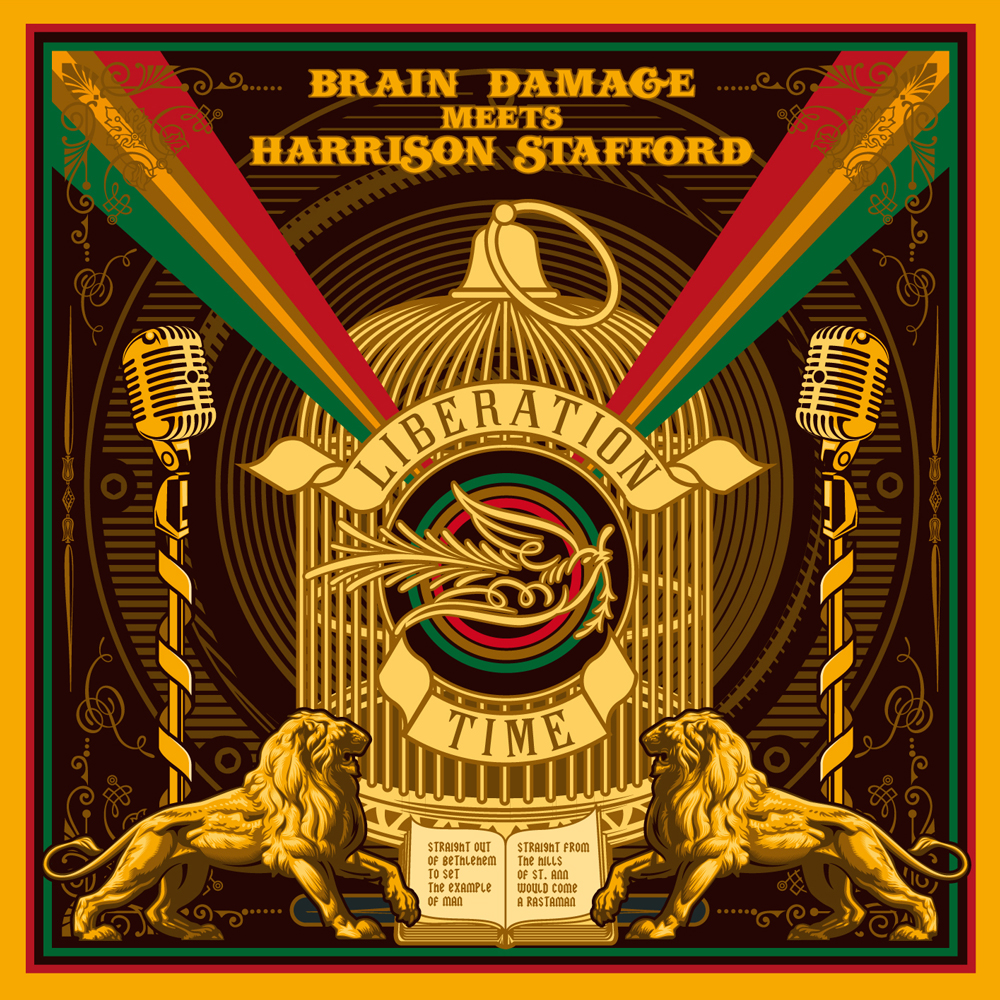 To gain some grasp of the genesis of this new project, that may seem surprising at first, let’s address what both artists have in common, rather than what differentiates them. Internationally recognized masters in the styles, respectively reggae & dub, that they are developing in parallel for almost 20 years, without

never really meeting each other, the two protagonists strive to challenge their codes in an ever greater respect to their Jamaican roots: two decades furthering a relentless fight against musical orthodoxy, to the benefit of interbreedings that have always been major contributions to music — and arts in general — History. This is evidenced by jazz and Jamaican traditional music fusion in the case of Harrison Stafford, and notably with his amazing adventure with Groundation, as well as by Martin Nathan countless experimentations, over Brain Damage prolific discography, always digging in more unlikely and audacious directions.

From this unexpected collaboration will stem « Liberation Time » album, an LP that will delight many fans of the two artists’ works, all that builds their respective uniqueness being there so well intricated. Harrison Stafford unique voice supports, in a most elegant way, the delivery of a uniting message focused on self-empowerment through music and his universalist vision of Rastafarian faith. Brain Damage writing and production, on the other hand, appear always more subtle and personal, intellectualized yet visceral. Solid compositions, hit melodies and classy dub effects are among assets that will undoubtedly confirm « Liberation Time » as one of the most accomplished collaboration projects of this year.

Harrison Stafford was born in 1977 and grew up in the town of Pleasanton, an east bay suburb of San Francisco, California. He attended regular public schools and also spent time in Synagogue studying the

Torah and learning Hebrew. His parents have a deep appreciation for the love of music and music played an important role in the daily life of the family.

For reasons even he can’t fully explain, reggae music and its’ history touched him at a very young age and sparked a love of the rhythm and culture of the African diaspora. Still in high school, he began to wonder why reggae music, coming from a relatively small group of poor black people, was such a powerful voice for equal rights and justice, and he longed to be a part of that worldwide struggle.

After graduating from high school, Harrison Stafford studied jazz at Sonoma State University where he formed the fusion reggae group Groundation in 1998. Groundation has since become one of the leading conscious bands of the underground music scene having released eight albums of original music and participated in countless world tours. Harrison Stafford continues to be a driving force behind Groundation both in his role as lead vocalist and in his creative ability to develop exciting new music.

Drawing on his personal research and his travel experiences in Jamaica and Africa, Harrison Stafford created a college level course titled « The History of Reggae Music », which he taught at Sonoma State University from 1999-2001. The course was unique in that it took students who maybe just recently heard of reggae music or only knew it from the popularity of Bob Marley and helped them appreciate the music on a deeper level; helped them understand how the music and message really define who we are and where we stand in this time.

From 2000 to 2012 Harrison Stafford produced a documentary film on the history of the rastafarian movement and reggae music; entitled « Holding on to Jah ». The film features exclusive interviews with the who’s who of reggae legends including The Congos, The Abyssinians, Ras Michael, Brother Samuel Clayton, Pablo Moses, Israel Vibration, IJahman Levi, Countryman, and Winston McAnuff among many others. « Holding on to Jah » was a collaboration with his longtime childhood friend, director Roger Hall, and after so many years following securing all the publishing rights « Holding on to Jah » saw its worldwide release November 2015.

Harrison Stafford continues to write music and tour with Groundation and to get involved in other projects that help spread the music and the message. He recorded a groove-jazz influenced album call « Rockamovya » in 2008 which was a collective featuring members of Groundation along with Horsemouth on the drums and Grammy-nominated Jazz guitarist Will Bernard. Harrison Stafford also began solo works including a studio release (« Madness », 2011) and a live DVD/CD (« Throw Down Your Arms », 2012) under the name “Professor” which focused on the Israeli-Palestinian conflict and featured legendary Jamaican musicians Leroy “Horsemouth” Wallace on the drums and Errol “Flabba Holt” Carter on bass.

In 2016 Harrison Stafford released another solo project this time under the name “Harrison Stafford & The Professor Crew”. The album « One Dance » was released in May and received international acclaim as an album of celebration and a call for world unity. Featuring his Jamaican all-star lineup tour dates throughout Europe, South America, and the USA saw the band take to some of the biggest festival stages in the world.

Looking to take the new year by storm Harrison Stafford has put together a new Bay Area group featuring young up and coming jazz and reggae musicians fit and ready to tour the music and bring the fans something they’ve never heard before. Always looking to surprise the audience with something creative and unique; expect great things in 2018 and beyond!